There’s very little to get excited about normally, which is why i suppose russell hobbs decided to get some whizz kid straight out of college to design this. Unlike the toast it produces, this is really over-done. No need for the digital blue display (which never goes off, meaning you have to unplug it) and it’s quite “fat” for a two-slice toaster, protruding quite a way from the wall. But there’s just something about it which makes the whole operation very simple. My old toaster is an old-style four-slicer, no digital display, no push button settings. But somehow seeing easily what setting you’re on with the russell hobbs, and seeing the countdown timer, means you know what you’re getting, and means you can change your mind at the last minute and be fairly sure of the results. I find the slot is deep enough for my regular bread – hovis wholemeal – so no problems there. Fits a crumpet and a muffin nicely too. Overall – way too much in lots of ways, but it does give you a decent slice.

This is a higher-tech toaster than most people would ever desire (or probably really need), but you can’t fault the functionality here. There are a number of settings (1-7) which range from very lightly toasted to the much darker varietythere are also options to defrost bread and (quite uniquely i think) reheat toast that has gotten cold. That has been a particularly popular feature in my household at least. Finally there is a small pull-up rack at the top of the toaster, which is ideal for toasting rolls or bagels on the outside. The display is clear and the functions are clearly marked and everything is easy to use. The toaster doesn’t quite meet full marks though, and that is simply because the opening at the top is *slightly* too small for conventional british bread. I suspect this has been devised with a european (and possibly american) market in mind where toasting bread is substantially smaller. Whilst bread does fit it is a little bit of a squeeze and very slightly knocks the edge of what is otherwise a great product. Nevertheless- highly recommended.

Dinky little black toaster that’d be perfect for a small kitchen. Love the simplicity of the design, love the fact it’s not chrome (therefore, easier to keep looking clean) and i love the fact there’s a sticker on the front of it (if you decide to keep it on that is) showing you what settings will produce which results with your toast. Unfortunately this only gets four stars from me, and i shall tell you for why – the slots inside the toaster are small, and only do small slices of bread. Regular sized slices of bread tend to jut out at the top meaning you end up with un-toasted ends at the very top. Got rid of my old toaster as i was constantly having to stop the toasting process halfway through to turn the bread upside down to cook it evenly and now i have to do it with this one too. I don’t understand this trend of toasters not being able to handle a regular sized slice of bread from top to bottom. It’s not even as if the slots were long enough to put the bread in sideways. That’s the only disappointing aspect of the toaster for me, and if it had been a little deeper with more capacity for the bread, it’d have gained a five star and +a from me.

This russell hobbs toaster is a small two slice toaster. It comes sensibly packaged and is a nice compact size and weight whilst feeling reasonably solid. The toaster itself is very easy to use and has some useful options (i’ve not bought a new toaster in a long time so some were new to me). Along with the usual options to select how dark you want your toast this also has options for reheating your toast and also for cooking from frozen. These allow you to do these things without needing to adjust your usual toasting preference. The body of the toaster gets fairly hot if you toast on maximum, something to be aware of when placing it, some space around is advised. The toast is reasonably evenly browned though perhaps not perfect. It’s a reasonable toaster and one i will use as it’ll use less energy than my current toaster (one designed for four slices but i’m the only regular toast eater in the house), though that may be slightly mitigated by it’s display being on at all times. 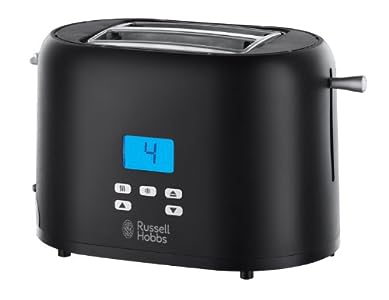 When i first got the toaster out the box i did think wow, was a lovely looking piece of kit. It fitted in rally well with other appliance sin our kitchen but when using it i was left very disappointed. First of all the slots seem much smaller than our old toaster. Our bread sticks out the top leaving part of the bread un toasted. The toaster has a blue display that stays on all of the time which i found strange and unnecessary. I expected the light to come on and a countdown clock to display the time left till the toast pops but the light just always stays on unless you unplug the toaster. We did cook bagels and muffins in the toaster and they came out fine, even coloured and nice and hot. The toaster itself gets very hot on the outside so i wouldn’t want my kids anywhere near it. Over all it does a job and will be fine for us. Would i recommend it though, probably not on my first impressions.

One thing of some concern is the flimsy push-down knob. I’m really not sure how long this will last because it doesn’t feel very substantial. What was wrong with the old-fashioned, reassuringly broad push-down handle?i like the digital display which looks cool. Also, it has the added advantage that you can’t ‘clean off’ the numbers round the dial which is what happened to my last toaster. Annoyingly though, it stays on when you’re not toasting, which means you have to switch off at the wall. This isn’t really a huge drawback since after all, this is best practice. It would be nice though if, when you switched on again, it remembered your preferred setting, which it doesn’t. The functions for toasting frozen bread and re-warming toast are useful enough although i think they are fairly standard on most modern toasters. The crumb tray is a standard detachable crumb tray. As for toasting, i have found the toasting results a little patchy but relatively acceptable.